We left VT on April 6th on a big trip out west. Starting with the south first and eventually winding up in British Columbia before working our way back home.

Here’s a bunch of photos explaining the first part of our trip.

We went to the Cheat River in WV to squirt boat with Jim Snyder.

We spent a couple days paddling on the Chattahoochee River in Columbus, GA.

It was warm and spent lot’s of time upside down!

We left Columbus and headed to Fayetteville, GA to spend a few days with the Farrington’s.
They live close to where The Walking Dead is filmed in Senoia, GA.
This photo was taken in front of the wall in Alexandria.

We left GA for the next stop on the trip, AZ to visit family and Jeff’s  office.

Spent a week in AZ then headed to Reno, NV.

We did some SUP surfing in Sparks, NV.

We took a side trip to Coloma, CA from Reno and paddled on the SF and NF of the American River.
Jeff throwing some ends on the SF.

Made it on a few podiums that weekend.
The odds of podiuming improve dramatically when you compete in every event.

Our next stop was a quick paddle on the Salmon River before heading to the Locsha.
This photo is on the Locsha River. Thanks Devon for guiding Jeff and Scott down the monstrous ww. Leaving Erin and I free to play!

We did some more SUP surfing at Kelly’s in ID.

Looping in the bottom hole at Kelly’s.
Photo: Jeff Campbell

We are back home and I’ll be posting up photos of the second half of our trip soon once I get settled in. 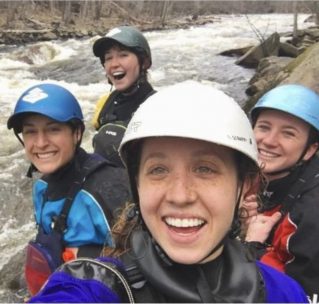