Thoughts About Fear from a Scared Kayaker

Recently I participated in a whitewater kayak instructor training for returning guides. We were all assigned topics to teach and I was given combat rolling. When I saw my name listed for that topic, first I felt my stomach roll, then a small weight in my chest, and then a little bit of sweat in my armpits.

Irrational thoughts flooded my mind. Would I have to demonstrate a combat roll in front of everyone? What if I failed? What if I swam? What would everyone think of me?

As I searched the internet for techniques of the combat roll, I realized that it’s essentially the same thing as the flat water roll. Of course there is the factor of the swirly water, powerful eddy lines and sticky holes which may make rolling a real challenge. But for the sake of my whitewater instructor training, the difference would really be that a combat roll has more pressure, a sense of necessity.

On the day of the training, I announced to the group that I would be teaching combat rolling. Immediately, my fellow instructors cried out in defiance, groaned, or simply shouted “nooooo.”

My response to their cries came as a question: “Okay, why did you all just react this way? What came to mind when I said those two words together: combat rolling?” People gave animated answers such as fear, drowning, hypoxia, and cold.

I shared with the group something I had recently learned while watching a video called Kayak Rolling Mental Game by Anna Levesque, an author, adventure coach, and creator of Mind, Body, Paddle. Anna talks about how often our train of thought is: I need to have my roll in order to be able to do my roll and ultimately be relaxed and confident while rolling. She challenges that way of thinking by reversing that line of thought. She suggests to first be relaxed, have fun, and be confident that although you don’t know how to roll, you can learn. Then you are more likely to be able to do the roll and have a successful roll. When we think this way, we can come from a place of relaxation and confidence rather than a place of tension and pressure.

I proposed to the group that we pair up and discuss with our partner a trick that we use on the river when we get scared or anxious to calm us down and focus us. People immediately started sharing with each other and some even got into deep, meaningful conversations which I had to cut short for the sake of time. When sharing with the rest of the group, people said they sing to themselves, take deep breaths, smile, and say a mantra.

Now that we had our own tools for staying calm, I invited the group to go rolling. This time, they followed with ease and the vibe of the group had shifted. Rather than being tense and uncomfortable, people were laughing together, supporting each other, and willing to roll.

Afterwards, several of my peers came up to me to thank me for approaching the lesson from this angle. One instructor said that he really appreciated me bringing this subject up because he felt that too often the concept of the mental state around kayaking is overlooked, when it actually plays a very important role in kayaking.

While I have encountered kayakers who don’t mind it, I’ve found that many boaters have at least some resistance towards being upside down in the river inside their boat.

First of all, there is the unnaturalness of it. When else in your life do you experience the sensation of bobbing upside down in water? Second, there is the physical aspect – disorientation, claustrophobia, coldness, darkness, perhaps water up the nose, all which can trigger the brain to think “Danger! Something is wrong with this situation!”

So why do it anyway?

Here’s an excerpt from the book “Does The Wet Suit You? The Confessions of a Kayak Bum” by Whit Deschner, which I find perfectly sums up why we as boaters keep coming back for more, despite the discomforts.

“I felt small, weak and scared — not an excited scare but a nauseating scare of luck. It took more mental strength than I’d ever known to pull back into the current.The sound of the falls grew faint behind me. Then at last, the mouth of the gorge yawned before me and suddenly I smiled and knew, though mentally beat, that I would rather be no other place in the world.”

I’ve felt this sensation myself and seen it in the eyes of my students. There’s a moment when that fear becomes elation. When you do the thing that you feared anyways and that fear then gets contrasted by empowerment, a sense of security in yourself, a sense of belonging in nature, and the most stunning scenery all around you. Those are the feelings that keep us coming back for more.

During Women’s Weekend, one of my students who is new to paddling was nervous to try surfing. I brought the group down to an eddy with good access to a small surf wave. She told me she wasn’t sure why but surf waves scared her. She supposed it was because she didn’t quite understand how they worked. I showed her how to get on the wave and what to do once she was there. She told me again she was nervous and I said “that’s okay. We are all here supporting you.”

She went for the wave and had an okay surf. She didn’t flip and came back to the eddy. I gave her some more tips and she went for it again. This time she found the sweet spot on the wave and was really surfing. I took my eyes off her boat and looked at her face and she was radiating happiness. She stayed on the wave for several minutes smiling and loving the moment. A few rapids later, I found her another, bigger wave and she surfed that one too, over and over. The other students cheered her on and everyone was so happy for her to have found her love of surfing.

Someone recently told me that in order for the brain to be stimulated to experience euphoria, it needs to believe that it is in some state of danger. Well coincidentally, the definition of fear is “an unpleasant emotion caused by the belief that someone or something is dangerous, likely to cause pain, or a threat.”

Without fearing the wave before her approach, would that student have enjoyed learning to surf as much as she had?

Oftentimes what stops us is fear. Fear of getting hurt, of failing, of looking bad in front of others. These fears are entirely valid and natural. I feel those fears all the time. But what I find even scarier, is the idea of living a life without trying something new, without experiencing vulnerability, and without showing myself what I am capable of. 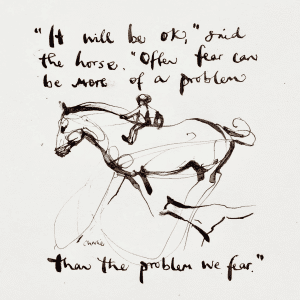 So now that I’ve inspired you to get out there and try, how can you utilize that fear to help you?

If you’ve ever looked at whitewater and felt scared, congrats! You are an evolved human. Fear is healthy and natural. It lets us know when something is dangerous and tells us to slow down and evaluate the situation.

When I’m out there on the river and the fear has slowed me down and I’m wondering when to go ahead and push my limits, here are some questions I’ll ask myself:

Many of you reading this are probably familiar with the rapid on the Deerfield River, called the Gap. It’s a short but technical class III rapid, the only class III rapid on a stretch of class I/II whitewater. It’s the Fife Brook Section’s biggest source of pride and carnage.

When I was learning to kayak, I feared the Gap. Once I was skilled enough to run it, I still feared the Gap. Every time I would go out for a paddle on Fife, I’d think about the Gap and whether or not I would run it that day. I’d spend a lot of my time paddling thinking about a rapid that I wasn’t currently paddling… does anyone else hear how silly that sounds?

I was out there on the river, a time to connect with myself, my friends, and nature, and thinking about something that wasn’t even happening. Fear and anxiety can do that to a person. Sometimes I missed the days when it wasn’t even a question if I’d run the Gap or not – when it was totally out of the equation. Those were simpler times.

In hindsight the solution for me was very clear: take the Gap out of the equation! I am certain that I’ve spent more time in my life worrying about running the Gap, than actual time spent paddling in that rapid. Yes, it’s a great rapid and can be lots of fun, but it’s also one short rapid in an entire section of lovely Class II rapids.

What I’m saying is, get back to the moment. Be present to your experience. What are you doing? Where are you? Put your hands in the water and swirl them around. Listen to the sounds of the running water and the wind and the birds. Take a long, slow breath. I might end up deciding to run the Gap or I might decide to walk it. But I’ll think about that when I get there. Right now, I’m going to experience this moment, here and now.

What are your thoughts on fear? What’s an experience you’ve had around fear on or off the river? What are some tools you’ve used to stay calm on the river? Let’s normalize having fear and have more conversations about our mental game on the river! I’d love to hear from you.

How to Prepare for your Fall Paddling Clinic

By Office Staff
How to Prepare for your Fall Paddling Clinic By Shira Lander This time of year, we usually get a call or two during the week before a paddling ...

Unpopular Opinion: There Is More To Life Than Paddling

By Office Staff
By Shira Lander When I first started kayaking, it was all I wanted to do and all I thought about. When I was with other paddlers, all we talked ...